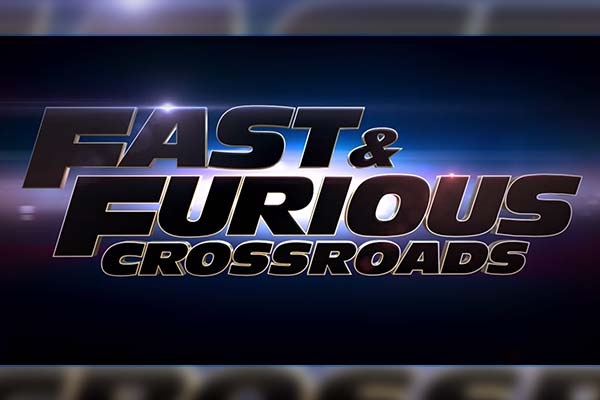 Fast & Furious Crossroads puts players in the driver’s seat of the non-stop cinematic-style action of the Fast & Furious franchise. Packed with gadgets, death defying heists and iconic vehicles, the game will provide fans with an exciting story-driven experience, and an unprecedented three-way multiplayer mode, on which more information will be shared in the coming weeks.

From the trailer, I’m getting an old-school arcade racer kind of feel. It’s a genre that’s been sorely missed from this generation of consoles which seemed to have focused on realistic driving simulators. The three-way multiplayer feature is especially intriguing and no doubt will be a highlight of the game. Crossroads certainly more in line with the over-the-top, exaggerated scenarios seen in the later films than the series’ street racing origins and personally this is a good thing.

It’ll be interesting to see how some of these cars handle and whether your car selection (if that’s even a possibility) will make an impact on the frenetic-looking challenges. Speaking of which, they look positively preposterous, with exactly the kind of irresponsible driving we’ve come to expect from Dom & Co.

Fast & Furious Crossroads will be released on 7th August 2020 and available on Playstation 4, Xbox One and PC.

Creator. Owner. Maestro. CEO. That last one is probably a bit too much, but basically Sean is a rarity by being both the brains AND looks behind Review Avenue. Having established the site in 2010, he still can't believe people still value his opinion, with some even genuinely asking for it without laughing.
You might also like
ActionFast & FuriousEditorialsFeatures

by Sean Burton on June 24, 2020
In this episode, we’re boarding Jan De Bont's 1994 action and bomb packed bus Speed. Join us as we reveal some film trivia and find out who's Speed King!

by Oliver Woodings on June 19, 2020
Get all the details on Giles Alderson's Medieval actioner Arthur & Merlin: Knights of Camelot, including the release date and trailer.
3.0

by Oliver Woodings on June 5, 2020
May these be the last days of Netflix wasting our time with derivative nonsense.
4.0

by Sean Burton on June 3, 2020
Considering The Iron Mask keeps its main draw chained up in a cell, this action-stuffed CGI globetrotter could have done with some restraint with its bloated and incoherent plot.
8.0

by Sean Burton on June 2, 2020
All aboard the Joon Ho Train as the Godfather of contemporary social commentary takes us on a thrilling ride of first class entertainment.

by Sean Burton on May 23, 2020
All the latest details for Christopher Nolan's time twisting Tenet, including the most up-to-date trailer.
Comments
Leave a reply

by Sean Burton on June 24, 2020
The Last Waltz is the definitive insight and celebration of a band, The Band, whose music defined generations and unquestionably influenced the sound of rock and roll we hear today.
11
8.0

by Sean Burton on February 10, 2020
Bliss serves up visceral unrestrained film-making that surely won't be for everyone, but those who willingly board the Begos Train will be in for one a hell of a trip.
119
8.0

by Sean Burton on June 5, 2020
Enraging in its subject matter and engaging thanks to its mesmerising performances, Richard Jewell is a diamond of a drama.
114
8.0

by Oliver Woodings on May 1, 2020
Despite the film's weirdness, I couldn't keep my eyes off it. It somehow all works, which is something I don't entirely understand. Perhaps it's in part due to Plummer and Reeves terrific performances, the artful photography by Seamus McGarvey, or how Butterfly Kiss successfully asks the viewer to involve themself in such deplorable characters.
142
8.0

The Vast of Night

by Sean Burton on June 2, 2020
Go quietly into The Vast of Night and you'll be rewarded with one of the year's best intimate sci-fi pictures.
115
Latest Basement Additions
6.0

by Sean Burton on October 3, 2019
Fans of anthology horrors such as Creepshow and Tales From The Crypt will find much to enjoy in their 90 minute stay at Blackmore's lodge.
179
5.0

by Sean Burton on September 7, 2019
This book-ending of King's mammoth novel further proves that some stories should remain on printed pages for the reader to envisage.
135
5.0

by Sean Burton on August 28, 2019
Critters Attack! nips at the heels of its few positive aspects instead of going for the jugular, but there are just enough bite-sized moments of fun to recommend it for a midnight movie marathon.
136
5.0

by Sean Burton on July 11, 2019
Demonic doll Annabelle may have come home, but it's not a return worth celebrating.
157
TOP 10 All Time
1
Edge of Fear
2
The Party’s Just Beginning
3
Robin Hood: The Rebellion
4
All The Devil’s Men
5
Detainment
6
Your Move
7
Escape Room
8
Ring: 20th Anniversary Review
9
Scream For Me Sarajevo
10
The Resistance Banker
Copyright © 2020 Review Avenue, All Rights Reserved.
Fonts by Google Fonts. Icons by Fontello. Full Credits here »