It was made for TV so had a tiny budget, I get that, but what in the name of all things arachnid was that thing they faced?! Yes, it takes the form of a spider because it’s the closest representation of Earth, but it looks like the producers set aside 55p for the special effects that makes up the abomination in question and the rest went on white make up for Pennywise. Thoroughly disappointing, especially after we have invested so much time into the film. The whole of Part 2 pales in comparison to its predecessor though, and even at over 90 minutes in length, it feels like it’s rushing to a conclusion: there’s no atmosphere of “this thing haunted our childhood, let’s kill it once and for all”. It’s more like “looks like we’re back again, friends. Let’s make this quick, I’ve got places to be.” As for how the ending plays out, well, it’s certainly more coherent than the novels ending; I still don’t fully understand what the hell went on down in those sewers, or in King’s mind when he was writing it. 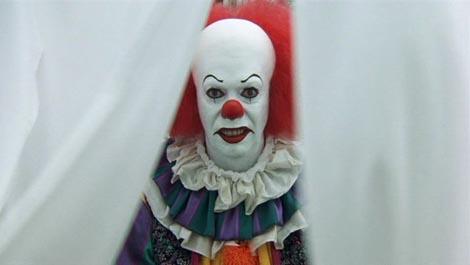 Whenever I ask anyone “Have you seen It?” they almost always respond with “is that the one with the creepy clown?” and rightly so; yes, it’s the ‘creepy clown’ film, but that clown and Tim Curry’s portrayal of it is the only real memorable thing about It. I’d even go as far to say as it’s career defining and unforgettable; he does for clowns what Jaws did for sharks. The maniacal laughter will cause many a-sleepless night, and his snarling fangs will haunt your nightmares on the nights that you do manage to sleep. A genuinely classic horror villain that is cruelly kept on a short leash due to TV content guidelines; it’s a good job his presence alone sends shivers down the spine, because he never actually kills anyone on screen, it’s just implied by a twisting close up of his open mouth that fades to black.

It is an enigma in the Stephen King movie collection. It’s not all that memorable, but at the same time it’s known by so many; I’d bet my house that it’s because of Tim Curry and his terrifying Pennywise performance. There’s nothing scary about it, and tension is never built. The town of Derry is a narratively unexplored goldmine, and I’d love to see a miniseries based on the stories from that town that lead up to the Losers club forming; I found them more interesting to read at times than the actual story of IT. The younger actors outshine their elders, and plot wise it just about manages to cover enough to justify its “based on” tag. Anyway, It isn’t an essential watch, and I’d highly recommend you read the book, even if you’ve already seen the film.

And if anyone can explain to me what The Turtle is, I’d greatly appreciate it. Answers on a postcard.

Have you seen IT? What’s your thoughts on the film? Let us know below.

Creator. Owner. Maestro. CEO. That last one is probably a bit too much, but basically Sean is a rarity by being both the brains AND looks behind Review Avenue. Having established the site in 2010, he still can't believe people still value his opinion, with some even genuinely asking for it without laughing.
You might also like
editors pickHorror

by Sean Burton on August 5, 2014
This is not a review. It is simply a short message as to whether you should see Transformers 4 or not.

by Sean Burton on August 7, 2013
Feeling more like a continuation to Mid Morning Matters than vintage Partridge, Alpha Papa still has plenty of reasons for fans of the original series to see it.