A brilliant painter facing the worst creative block of her life turns to anything she can to complete her masterpiece, spiraling into a hallucinatory hellscape of drugs, sex and murder in the sleazy underbelly of Los Angeles.

I’ll just get right to it: if conventional horror is what you’re looking for, there’s a very high probability you’ll despise Bliss. It’s a punishing, relentless sensory attack that will no doubt leave you with a throbbing pain in your skull and unshakeable ringing in your ears. But if exhilarating and distinctive horror is your bag, then the pleasure Bliss brings is worth the ensuing pain.

Right from the go, there’s a warning for sensitive viewers – presumably in regards to flashing lights and strobe, but the same sentiment goes for anyone of an easily offended disposition. It begins innocently and unassumingly enough, as we follow a struggling artist dodging her landlord hounding her for rent money and an agent pestering for updates on a commissioned piece. Tired of being harangued and desperate to get the creativity flowing again, Dezzy visits her drug dealer who offers her something “bonkers”. He ain’t wrong.

But back to the sordidness of Bliss. Dezzy awakes from her debauchery-filled evening and finds there has been some progress on a painting she’s been stuck on. The problem is, she has no recollection of ever picking up the brush. What she does have, however, are horrendous flashbacks to the night before and a thirst for blood. Unable to control her impulses, Dezzy spirals out of control in a never-ending hunt to chase the high and quench her lust for the red stuff.

Without a doubt, Bliss prioritises its chaotic style over everything else. As a result, I wasn’t entirely sure what, if anything, the message was here. I feel like it was trying to say something about either drug taking as a whole, the dangers of over-indulgence, the cost of creativity and the nature of Los Angeles in general, but there’s nothing concrete in its meaning.

Performances are fine from all, with Dora Madison putting in what was likely a demanding turn as Dezzy. It does feel like a one-woman show, with other characters being little more than figures to drive the plot forward. No one particularly evolves or is worth rooting for either, even Dezzy as she falls further into the rabbit hole of self-destruction.

There’s plenty of gore on offer though and will please horror hounds who sniff out this kind of subgenre. Comparisons to Gaspar Noé (Climax, Irreversible) and Abel Ferrara (Driller Killer, Bad Lieutenant) have been made in regards to director Joe Begos’ style, but there’s another more recent film I found it similar to – Panos Cosmatos, Casper Kelly’s 2018 Mandy. As a double feature, Bliss and Mandy would probably knock you out for days, only for you to emerge to sing the praises to friends of the cinematic beat down you inflicted upon yourself.

Bliss is remorselessly brash, deafeningly loud and overwhelmingly colourful. All these aspects are fired into your eyes and ears at a breakneck pace giving you very little time to recover before the next audiovisual assault. I couldn’t – nor did I want to – look away from its climax and don’t recall blinking for a good few moments. This all may sound superlative, but I genuinely hadn’t had a filmic experience that Bliss provides for years. It’s visceral, unrestrained film-making that surely won’t be for everyone, but those who willingly board the Begos Train will be in for a hell of a trip. 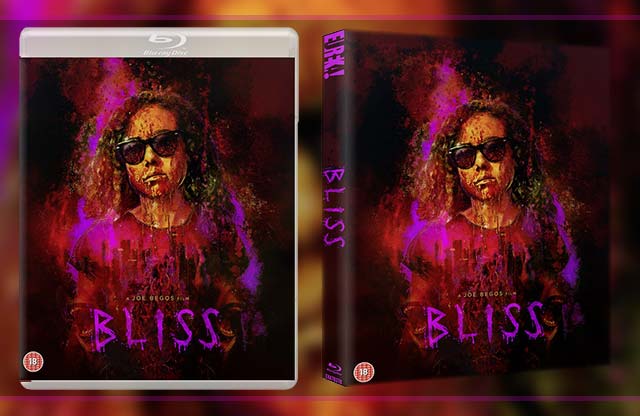 Bliss serves up visceral unrestrained film making that surely won't be for everyone, but those who willingly board the Begos Train will be in for one a hell of a trip.

Creator. Owner. Maestro. CEO. That last one is probably a bit too much, but basically Sean is a rarity by being both the brains AND looks behind Review Avenue. Having established the site in 2010, he still can't believe people still value his opinion, with some even genuinely asking for it without laughing.
You might also like
HorrorEurekaReviews
6.0

by Sean Burton on December 22, 2020
With a little more focus and characters worth caring about, the scaring of Julie could have translated as a memorable one for audiences too.
8.0

by Sean Burton on December 12, 2020
First Bite is a tantalising taste of what's to come from a director who has nailed the starter section of his career.

by Sean Burton on December 6, 2020
Get the latest details on Nia DaCosta's contemporary retelling of seminal horror icon Candyman including the trailer and current release date.
6.0

by Sean Burton on November 30, 2020
I couldn't make heads or razor-sharp toothed tails of it, but Murder Me, Monster is commendable for just how weird it truly is while still maintaining some semblance of narrative.
8.0

by Sean Burton on November 28, 2020
Brandon proves the rotten fruit doesn't fall too far from the Cronenberg tree in Possessor, a sinister and upsetting sci-fi reserved for the strong of gut.
Comments
Leave a reply