by Sean Burton on November 23, 2020
Reviews
218
0
previous article
Les Misérables (2020)
next article
Death Of Me
Contents
The Details
Release Date

Escape to Tianhuo Island, a beautiful remote paradise, where renowned businessman Jack Harris is about to open a brand new holiday resort. With its breath-taking views overlooking the stunning mountains and the chance to tour the dormant volcano, visitors begin to flock from far and wide to experience the awe-inspiring sights. But beneath the Island’s beauty lies the ultimate danger. When the mountain decides to wake up, it creates terror in its wake.

Opening a luxury hotel on the side of an active and volatile volcano is as smart of a business move as building a theme park and filling it with dinosaurs. But the former is exactly what happens in Simon West’s Skyfire, an absolute blast of a disaster movie.

There’s no escaping the fact that Skyfire is essentially a Chinese retelling of Dante’s Peak by the way of Jurassic Park (sans prehistoric creatures, obviously). We follow Meng Li (Hannah Quinlivan) who, as a child, survived a volcanic eruption. Her mother wasn’t so lucky. Li is determined to continue her mum’s work as a volcanic researcher and along with a team of fellow brainboxes is enlisted by greedy businessman Jack Harris (Jason Isaacs) to work on a system that monitors the molten mountain’s activity to ensure it doesn’t erupt over his precious resort.

Which, despite the warnings from Li and her father who both have a bad gut feeling about things to Harris, is precisely what occurs. And just as Harris is taking potential investors on a tour of his playground too! Talk about bad timing.

Scriptwriters Wei Bu and Sidney King know how ridiculous the premise is (an observation deck which lowers directly into the volcano?! The insurance premiums on traveling here must be through the roof) and play up to it wonderfully. The leads find themselves in the most preposterous and unsurvivable of scenarios, but thanks to the skilful and exhilarating direction of West, who knows his beans when it comes to the genre having helmed one of the best of the 1990’s in Con Air, 2001’s Videogame adaptation Lara Croft: Tomb Raider and the sequel to ensemble actioner The Expendables as well as.. uh.. the video for Rick Astley’s Never Gonna Give You Up, and a cast who are game for anything, Skyfire is an immensely entertaining jaunt. Intentional or not, I found myself heartily laughing at the poor souls who failed to outrun the fireballs raining from the sky. Two specific fatal occasions could easily pass as comedic highlights of 2020 cinema.

Jason Isaacs (Lucius Malfoy in the Harry Potter franchise, Scoob!) is by far the most well-known name attached to the film and his appearance is notably brief. That’s not to say it’s an entirely throwaway inclusion; Harris still manages to has a satisfying character arc as a supporting cast member. Hannah Quinlivan as Li (who should probably stay away from tall and dangerous structures after starring in 2018’s Skyscraper) is a plucky, stubborn hero who is easy to root for. Her personal issues with her absent father Wentao (Xueqi Wang; Iron Man 3) hit the typical plot beats, but are effective nonetheless.

It appears no expense was spared on the effects either. Skyfire looks spectacular. The erupting landform is an awesome spectacle to behold, and the cast/stuntmen are for the most part dodging real descending infernos. Even in the most obviously CGI-heavy sequences, it’s never a problem or too distracting because I was too busy having too much darn fun. I only wish I could have seen it on the biggest screen possible, preferably in 3D too. Where it fizzles out on originality, Skyfire illuminates as a full-on disaster spectacle.

Skyfire is available on Blu-Ray, DVD and Digital Platforms in the UK from 23rd November 2020. 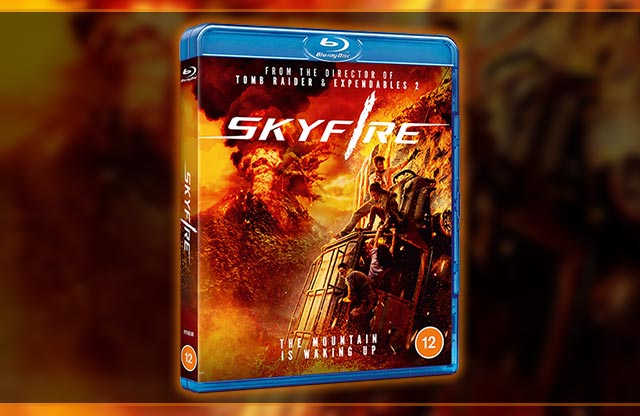 Skyfire is exactly the kind of over-the-top action film which would've lit up the box office in the 1990s. As it stands in 2020, it's pure peak V-Movie entertainment.

Creator. Owner. Maestro. CEO. That last one is probably a bit too much, but basically Sean is a rarity by being both the brains AND looks behind Review Avenue. Having established the site in 2010, he still can't believe people still value his opinion, with some even genuinely asking for it without laughing.
You might also like
ActionDisasterDVD/Blu-RayLatest Additions

by Sean Burton on December 6, 2020
The latest details on Avenger Black Widow solo outing from Marvel Studios and Cate Shortland, including the trailer and current release date.

by Sean Burton on December 6, 2020
The latest details on Daniel Craig as James Bond in his latest outing No Time To Die, including the trailer and current release date.
6.0

by Sean Burton on November 30, 2020
A small-scale historical tale that isn't fussed on the factual details, Fall of a Kingdom's faltering start is redeemed by its later action sequences and ongoing engaging character relationships.
8.0

by Sean Burton on August 17, 2020
Message Man's mission to rid the village of traffickers is undeniably valiant, it's just disappointing that the one delivering justice has the depth of a postage stamp.
Comments
Leave a reply