During World War II, an undercover British soldier tries get word to the Allies that the Germans have tons of supplies buried in five excavations across Egypt.

There aren’t many films that can boast about having a place on pop culture extraordinaire Quentin Tarantino’s ‘all-time favourites’ list, but Billy Wilder’s 1943 Wartime Espionage yarn Five Graves To Cairo certainly can. Now, for the first time ever in the UK, it is available on Blu-Ray from a 4K restoration thanks to Eureka Releasing as part of their Masters of Cinema Series.

Opening with a striking sequence of a tank recklessly accelerating across endless sand dunes, it’s here we are introduced to British Corporal Bramble (Franchot Tone; Mutiny on the Bounty). The only survivor in his unit after a battle with Rommel’s soldiers in North Africa, Bramble staggers through the desert until arriving at the largely deserted Empress of Britain hotel, staffed only by owner Farid (Akim Tamiroff; Touch of Evil, For Whom The Bell Tolls) and his French employee Mouche (Oscar Winner Anne Baxter; All About Eve, The Then Commandments).

While Bramble hopes to hide there, the hotel doesn’t remain deserted for long – Rommel (a scene-stealing Erich von Stroheim) and his men arrive and take over the building as new headquarters. Bramble assumes the identity of a recently killed waiter…only to soon discover that this waiter was also serving as a German spy, a role Bramble now has to adopt for his own survival. And while Mouche knows Bramble’s true identity, she has her own reasons for not wanting to aid in his plot.

Based on Lajos Bíró’s 1917 play Hotel Imperial, Five Graves To Cairo takes place almost exclusively in the Empress of Britain hotel. This means we spend a lot of time in the company of its guests and staff, to varying degrees of success. Let’s start with the positives though, shall we?

Unquestionably the highlight of Five Graves is Erich von Stronheim as Field Marshall Rommel. The film revolves around Rommel and his plans and von Stronheim is nothing short of mesmerising as the formidable General. At the time of filming and release in the early 1940’s, Rommel was still somewhat something of a mythical figure but coming off the back of decisive victories in North Africa, one thing was for sure – he was an astonishingly meticulous strategist and a man to be both respected and feared. Von Stronheim captures this perfectly and is one of the few genuinely great performances of the picture.

Sadly, I wasn’t as bowled over by the rest of the cast. There’s nothing particularly wrong with their work – Akim Tamiroff as jittery, eager-to-please-all Hotel owner Farid is another worthy standout even if his character is a rather crudely drawn one – but I felt they amounted to nothing more than stereotypes and caricatures. This meant Five Graves skirts dangerously close to being a comedy and is all the worse for it. Academy Award Nominee Franchot Tone is totally likeable but completely unbelievable as the Officer under cover as a waiter and, realistically, would have had his cover blown quicker than a firing 125mm artillery shell (thanks, Google!).

Anne Baxter as Mouche gives Dick Van Dyke a run for his money in the bad accents department as she attempts to put a French spin on her dialogue, only to result in word vertigo. Peter van Eyck is a joy to watch as Rommel’s aide Lt. Schwegler, but I felt he was either slightly restrained in his menace or outshined by his superior in von Stronheim’s ‘Desert Fox’. Fortunio Bonanova is possibly the most stereotyped of them all as the Opera-singing Italian General Sebastiano who has absolutely no power in the room.

Gripes aside, it’s still a wholeheartedly entertaining affair. The pacing is swift, the suspense is satisfying (especially in the opening act) and there are nuggets of dialogue dynamite in Wilder and Charles Brackett’s script. If you’ve never seen it before and World War Two films are your thing, it gets a strong recommendation from me for its alternative take on the genre. There’s very few battle scenes, although it does feature real-life combat footage. It’s essentially a bigger-budgeted theatrical production featuring an imposing figure of war – and a lot of ridiculing of every one else.

Five Graves To Cairo is rather sparse in the visual Special Features department, with only 2 additional goodies of note. There’s the radio play version featuring the film’s stars Franchot Tone and Anne Baxter as well as a 11 minute section taken from the three-part documentary Billy, How Did You Do It? in which Wilder talks about his early films, including Five Graves. The full doc is included in Eureka’s previously released The Lost Weekend.  The 32-page booklet includes extensive essays on the film too.

Five Graves To Cairo is available in the UK from 17th August 2020. It can be ordered from Eureka Store & Amazon. 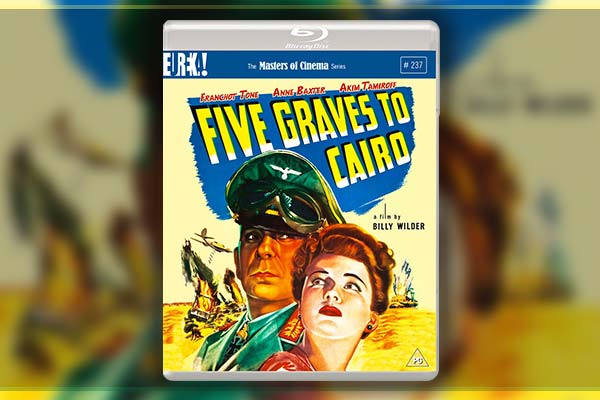 A thrillingly pacey but almost farcical tale of undercover waiters with orthopaedic shoes, Five Graves To Cairo is a theatre production first and feature film second but always entertaining.

Creator. Owner. Maestro. CEO. That last one is probably a bit too much, but basically Sean is a rarity by being both the brains AND looks behind Review Avenue. Having established the site in 2010, he still can't believe people still value his opinion, with some even genuinely asking for it without laughing.
You might also like
Espionagefeatured
8.0

by Sean Burton on June 24, 2020
A captivating lead from Ingrid Bolsø Berdal and an engrossing espionage tale means its impossible to keep my widespread praise for The Spy under wraps.
8.0

by Sean Burton on July 30, 2018
Defying all laws of movie sequels, Fallout accomplishes the impossible by being the best mission in a series of six thanks to some truly awe-inspiring stunts, a familiar yet engaging plot and a dedicated cast and crew.
4.0

by Sean Burton on March 1, 2018
Jennifer Lawrence is fooling no one in this overlong and underwhelming spy drama.
Comments
Leave a reply