Grimmfest want to give you £20,000 to help you finish your horror movie 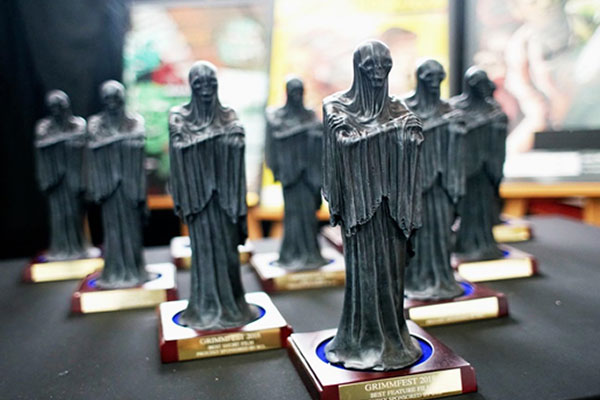 In 2018, Manchester’s premier horror film festival launched their own Awards for the films selected to screen there. For 2019’s instalment, Grimmfest aren’t going to wait until the winner of their latest award is even completed before showering it in prizes.

Called the Work-In-Progress Award, the accolade will be given to a feature in production or post-production but not yet finished. The winning title will be offered:

Submissions for the Work-In-Progress Award will be accepted via the festival’s FilmFreeway platform and filmmakers will need to submit a 10-15 min proof of concept teaser from the project in order to be considered. Early bird submission deadline is
22nd March 2019, regular deadline is 28th June 2019 and late deadline is 29th July 2019.

A who’s who of the horror community are once again involved with this years event, with the likes of recently resurrected Fangoria Magazine The Horror Channel and Shudder all proudly sponsoring categories and offering valuable perks for those who are victorious. Here’s a look at the Grim Reaper statues up for grabs in October –

2018 saw Tigers Are Not Afraid, Issa López’s terrifying tale of children caught up in the drug war of Mexico, triumph in the Best Picture category and John McPhail secured the Best Director trophy for his undead musical Anna and the Apocolypse. One of our absolute favourite films of the year The Witch in the Window, whose international sales were handled by Work-In-Progress prize sponsors Film Seekers, had success in the coveted Best Scare category. The iconic Barbera Crampton was also in attendance to pick up the thoroughly deserved Lifetime Achievement Award too.

2019’s Grimmfest will run from 3rd – 6th October at the Odeon Manchester Greater Northern. A lineup announcement is likely imminent but who knows – thanks to their new Work-In-Progress Award, it could be your film taking centre screen in 2020’s edition…

For more information on Grimmfest and to keep up with the latest developments, head over to:  http://www.grimmfest.com.
Just to be on the safe side for all you creators, here’s that link again for submissions: https://filmfreeway.com/grimmfest

Creator. Owner. Maestro. CEO. That last one is probably a bit too much, but basically Sean is a rarity by being both the brains AND looks behind Review Avenue. Having established the site in 2010, he still can't believe people still value his opinion, with some even genuinely asking for it without laughing.
You might also like
AwardsGRIMMFEST

by Sean Burton on March 6, 2019
Here's our picks of what stood out in the cinematic year of 2018 as we hand out the coveted and completely non-existent RAFTA trophies.
Comments
Leave a reply