A football player and his friends travel to the planet Mongo and find themselves fighting the tyranny of Ming the Merciless to save Earth.

An unexplained energy wave has pulled the Moon out of orbit, sending it careening towards Earth. Strange natural disasters bombard our world. Baffled scientists are at a loss as to the cause of the chaos. A lone voice – brilliant, but disgraced, scientist Hans Zarkov (Topol) – is convinced that these catastrophes are of extraterrestrial origin and predicts that we only have 10 days before the Moon crashes into Earth, destroying all life.

Realising that he alone cannot stop these sinister attacks he forces football hero Flash Gordon (Sam J. Jones; Ted) and New York travel-agent Dale Arden (Melony Anderson) aboard his makeshift rocket ship at gunpoint. Their destination – the mysterious Planet Mongo. On this strange new world all life cowers under the cruel reign of Ming The Merciless (Max Von Sydow), an intergalactic tyrant who demands absolute loyalty under pain of death. Aided by his menacing, golden-masked henchthing Klytus (Peter Wyngarde) he holds the fates of whole peoples in his icy grip, and Earth is but his latest plaything.

After crash-landing on Mongo Flash, Dale and Zarkov are immediately captured, and taken to the spectacular Mingo City city to face the wrath of Emperor Ming. Flash is sentenced to death, Zarkov to have his mind erased and reprogrammed, while Dale faces a fate unimaginably worse: to become Ming’s bride.

Enlisting the help of Ming’s daughter Aura (Ornella Mutti), Flash escapes his execution and flees, but his adventures have just begun. Seeking sanctuary in the forest world of Arboria he meets Prince Barin (Timothy Dalton) and undergoes the terrifying trial of the tree insect. Flash prevails but he and Barin are captured by the mighty Hawkmen, with whom Arboria is at war, and taken to Sky City where Prince Vultan (Brian Blessed) forces them into a fight to the death. But with Dale still imprisoned Flash must make friends of these warring princelings and enlist their help to overthrow Ming, rescue Dale and prevent the annihilation of Earth.

This release is actually my introduction to Flash Gordon. I’d never seen it prior to this review, so I don’t have fond memories of it as many will. A traditional review is rather moot (but for the record, I enjoyed it for what it is; 6/10, needs more Brian Blessed), given that this release is aimed at collectors and long-time fans of the film. Maybe even for those looking to introduce their own offspring to the outrageously cartoonish action contained within. If so, you’ll be pleased to know Flash has never looked better or been packed with more insightful Special Features.

Scanned from the original 35mm negative to produce 4K files, over 500 hours of manual restoration was reportedly undertaken to repair serious damage that included image instability, scratches and intermittent flicker. But most impressively is the vividness of its colour. It looks as if it was filmed four months ago, never mind over four decades ago. Due to its extravagant sets and indulgent colour palette, It’s clearly a film that has been crying out for the 4K treatment and Studio Canal’s meticulous restoring is absolutely flawless. Of course, some limitations are still on show – the special effects are at times noticeably dated – but that just adds to the entertainment. 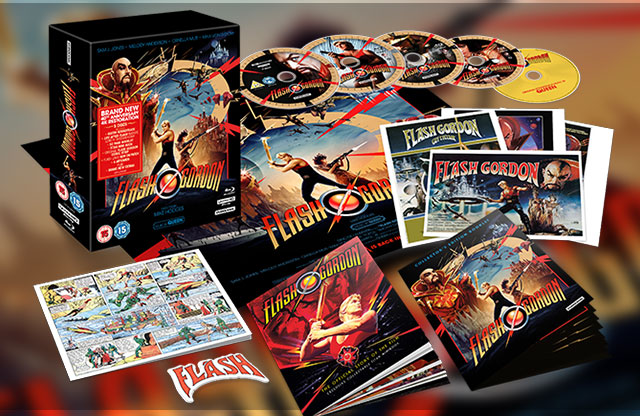 The standard (which I use the word lightly; it’s still pretty special) Blu-Ray release is crammed with so many Bonus Features, it needs a second disc just to fit them all in.

Interview with Mike Hodges (31 mins) – in which Hodges speaks of his career, how his time in the navy shaped his World view and also laments on the fickle nature of Hollywood. Hodges isn’t the most animated of interviewees and there’s a distinctly cynical nature to his opinions. There’s the odd nugget of interesting trivia here but nothing on the level of Disc 1’s sublime Lost In Space feature.

Episode 24 of Flash Gordon (1979-1982): The Survival Game / Gremlin’s Finest Hour (24 mins): A nostalgic throwback to the animated adventures of Flash Gordon. I imagine many people now in their middle-ages would have watched these on Saturday mornings with their Frosties.

Sam Jones’s Acting Start (4 mins): One of the few snippets from the Life After Flash documentary. This one catches Sam at what looks like a Comic Convention and has him talking about his first few years in the industry. He reveals his career plan at that time and how a relative was instrumental in helping him get ahead in the movie business.

Entertainment Earth on Flash Gordon merchandise (4 mins): Interview with toy company Entertainment Earth boss Jason Labowitz and Bif Bang Pow’s Jason Lenzi. I really wasn’t a fan of this short featurette. The pair talk about how it was a challenge to get the rights to Flash Gordon for their toy lines. But their attitude is irritatingly smug, as if the cult status and success of Flash Gordon would be nothing without them. That’s not to say their input isn’t worthwhile, just that sometimes a little humility goes a long way.

Bob Lindenmayer discusses deleted scenes and original endings (2 mins): Prop collector Vague recollections of deleted scenes and  an idea he heard somewhere of a purported sequel. The scenes he describes have apparently been lost so the best we can hope for is his descriptions of them. A rather unnecessary addition to the features in my opinion. Another extract from the Life After Flash documentary.

35th Anniversary Greenroom (8 minutes): In November 2015, At the 35th Anniversary Flash Gordon Reunion in London, Mike Hodges saw the cast again for the first time since filming. It’s wonderful to see the cast and Hodges together again and in such an informal setting too. Conversation flows naturally and anecdotes about their time filming Flash fly about effortlessly. A great watch.

35th Anniversary Reunion Featurette (6 mins): Following on from the Green Room meeting, the stars converge on stage for a more conventional Q&A hosted by Bif Bang Pow’s Jason Lenzi. His questions aren’t particularly probing or even that interesting, something which the short and closed answers from the cast also suggest, but it never gets tiring seeing reunions of famous ensembles.

Renato Casaro extended interview (5 mins): Flash Gordon poster artist breaks down his train of thought for his work on the marketing materials.

Brian Blessed Anecdotes (5 featurettes, 10 mins total. Not long enough, I’d say!): In which the inimitable Brian Blessed tells tall tales about his time on set including why Sam Jones is Flash Gordon, a weekly raffle with a suspicious outcome and how Mike Hodges almost ‘lost his life’ to laughter.

Melody’s Musings (3 featurettes, 6 mins): More stories from the set, this time from Melody Anderson. She talks about the film’s Wedding dress, how the phrase ‘Go Flash Go’ came about and what the hardest scene was for her to film.

On the soundtrack (Brian May & Howard Blake) (3 featurettes, 8 mins): Queen‘s Brian May talks about his meeting with producer Dino Dino De Laurentiis and his initial reaction to the Flash theme song. Composer Howard Blake also recalls a humorous story about how he first heard May’s music for the film.

Easter Eggs – I was unsuccessful in finding these but I’m promised they’re there somewhere!

As you can see, this is no subpar cash grab to make a quick buck. It’s a definitive celebration of a beloved fantasy adventure and its extras are more of a reflection on its production and the people involved than a collection of snippets trying to persuade you that it’s a ‘good’ film. Because let’s be honest here, Flash Gordon is not a good film. But it sure is an entertaining, out-of-this-world, once in a generation oddity that will continue to baffle and please for years to come.

Gordon's Alive and has never looked better as he begins his life at 40 in 4K.

Creator. Owner. Maestro. CEO. That last one is probably a bit too much, but basically Sean is a rarity by being both the brains AND looks behind Review Avenue. Having established the site in 2010, he still can't believe people still value his opinion, with some even genuinely asking for it without laughing.
You might also like
4KAdventure

by Sean Burton on November 30, 2020
Get all the details and special features for the upcoming restoration of Roger Corman's classic Masque of the Red Death and find out when it's hitting the shops.
Comments
Leave a reply