A couple's relationship is tested when uninvited guests arrive at their home, disrupting their tranquil existence.

“This is all just… Setting”, quips an intruding Michelle Pfeiffer as she looks around the sprawling home of Jennifer Lawrence, who is in the process of renovating. On the surface, the comment is an almost throwaway line about prioritizing decorating a house over raising a family, but much like many other aspects of mother!, appearances can be deceiving.

You see, mother! almost certainly isn’t about what you think it is about. The basic narrative outline sees Jenifer Lawrence starts as the titular mother, living in relative harmony with her partner (Javier Bardem). He is a poet, struggling to come up with his latest work while she spends most of her time fixing up their home. Their peaceful existence is interrupted when Ed Harris turns up at the house late at night, mistaking it for a B&B. The next day, his wife Michelle Pfeiffer arrives too, much to the quiet dismay of Lawrence. Bardem, on the other hand, welcomes them with open arms and caters to their every need – even when they disobey the house rules. Things take a turn for the worse when even more guests arrive in the form of Harris and Pfeiffer’s sons. What transpires almost immediately after their arrival triggers a downward spiral of events which can only end in tragedy.

By now, you’ve probably read about the audience backlash regarding mother!. It received boos at its premiere in Cannes (although it was screened at 10 A.M, and believe me: it should not be seen at such an early hour), received the dreaded ‘F’ CinemaScore and has bombed financially. I’d lay a large part of the blame with Paramount and the marketing team – obviously, the film needed to be advertised in some way, but giving the average cinema-goer the impression that it would be a straightforward horror was a very misjudged move, and it’s hard not to sympathize with those who had been misled. But ultimately, this is an Aronofsky picture, and when has anything he has done been straightforward? 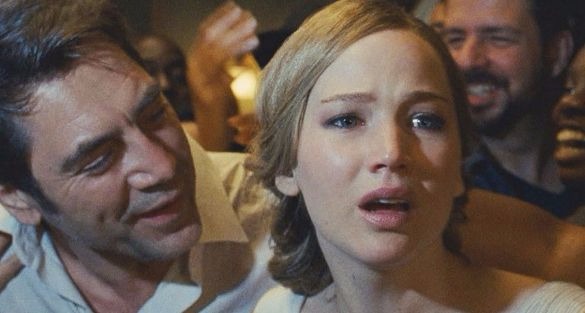 If you’re unaware of his work, Darren Aronofsky deals in surrealism film-making. From the excellent Requiem for a Dream to the slightly more accessible but still pretty crazy Black Swan, his films have frequently stirred up controversy. mother! is no exception, and doesn’t just push the boundaries of what is acceptable in mainstream cinema, but shatters its limits: one appalling scene in particular drew gasps from the audience, and on second viewing an unsuspecting couple walked out in disgust well before the credits rolled. It’s incredibly exciting in this day and age to get a release that still manages to divide audiences in such a divisive way, and I imagine this is what it was like when Cronenburg or Lynch unleashed their latest to world back in the day.

I know this review isn’t particularly helpful in giving you an idea of what mother! is about. That’s a calculated move. One thing to remember is what I mentioned previously: nothing is as it seems. The films subject matter can be read in many different ways, from a greatly exaggerated home invasion movie, to the perils of fame and even containing strong biblical references. However you read it, I guarantee you’ll feel infuriated by the sheer carelessness and thoughtless nature of Lawrence and Bardem’s house guests. In the beginning, the instances start out small – leaving dirty tissues around, smoking when told not to, and so forth. By the end, you’ll be clenching your fists in anger, gritting your teeth in despair and will leave the film utterly depressed, meaning Aronofsky has succeeding in eliciting a reaction. Make no mistake: there’s a high chance you’ll despise mother!.

Lawrence, who has taken a 2-year break from acting due to the emotional strain of filming this, is sublime as the lead. The film is largely told from her point of view, peeking over her shoulders or focusing on her variety of expressions. Javier Bardem is quite possibly the weakest link in the picture, and I mean that in the nicest possible way. At times he radiates charisma, but there’s other occasions where his performance is slightly phoned in and unconvincing. It’s also difficult to decipher what he is saying sometimes – especially in a pivotal moment during the closing scenes. Thankfully, it’s not too distracting and it is a criticism that is easy to overlook. Matthew Libatique’s disorienting, dizzying cinematography is a standout feature, taking you through the home with extended tracking shots that become cloyingly claustrophobic when the carnage begins. Aronofsky is almost sadistic in his choice to never pull back the camera in these moments, never giving you any room to breathe. I cannot stress enough just how rough of an experience mother! can be.

Put simply, there’s a very high probability that mother! is not for you. That’s a bold claim, but mother! is an even bolder film. It requires an open mind and the ability to look below the surface. It’s brutally uncompromising, utterly infuriating and undoubtedly one of the best films of the year.

Career best performance from Lawrence
Incredible how Aronofsky has woven a meaningful story into such a simple setup
Boundary pushing, genre-bending masterpiece

Bardem is sometimes hard to understand

The upsetting subject matter of mother! will divide more than Moses did with the Red Sea, but it is guaranteed to leave a mark.

Creator. Owner. Maestro. CEO. That last one is probably a bit too much, but basically Sean is a rarity by being both the brains AND looks behind Review Avenue. Having established the site in 2010, he still can't believe people still value his opinion, with some even genuinely asking for it without laughing.
You might also like
Darren AronofskyJennifer LawrenceReviews

by Sean Burton on June 8, 2011
Overflows with emotion.