by Christopher Burton on October 21, 2015
The Basement
275
0
previous article
The Visit
next article
5 Greatest Horror Villains

The first film in the series sets Freddy’s emergence against the backdrop of a strained and dysfunctional household. Heather Langenkamp as the protagonist Nancy has just the right mix of vulnerability and resourcefulness, taking the fight to Freddy in the climactic scenes of the movie. The film is also noticeable for being an early starring role for Johnny Depp, who meets a particularly bloody end. 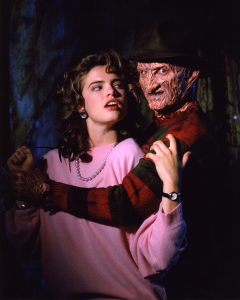 The second film, though not thought of particularly favourably nowadays outside of cult circles, is still notable for being a (now hilariously transparent) metaphor for the difficulties of dealing with a burgeoning sexual identity during adolescence. Controversially it messes with the series mythology; with Freddy possessing the closeted protagonist and using him as a vessel with which to commit murders.

The third and probably best entry in the series, Dream Warriors, see’s the return of a now adult Nancy as she helps a group of troubled, diverse teens in a mental institution as they are paid a visit by Freddy. It’s the rare slasher film, in which you grow to care for the cast of teens, rather than seeing them as disposable fodder for the movies antagonist. From the troubled Taryn to the geeky Will Stanton, the film is full of memorable characters. Freddy, for better or worse, also has more personality in this film, with his now trademark sense of humour rearing its charred head, culminating in some memorable one liners. 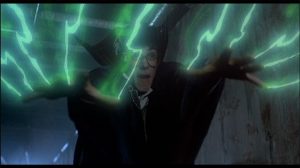 The following three films never really recapture the lightning in a bottle magic that makes Dream Warriors such an entertaining movie, or the first so enduring. Wes Craven’s involvement is missed. They have some visually inventive death scenes, memorably involving everything from superhero power fantasies to being trapped inside a video game. And the fifth film in franchise does boast some impressively realised gothic aesthetics and a darker tone.

The most interesting elements of these later movies involve the further exploration of Freddy’s history and the macabre series of events that led to his demise and rebirth as the nightmarish phantasm we know today.

Both series took something of a sabbatical in the early nineties, as both franchises effectively culminated in the ‘death’ of their monsterish antagonists. The final entry in the Friday series, Jason Goes to Hell, ends with Freddy’s gloved hand pulling Jason’s mask down into the depths of the neverworld.

Little more than a knowing in-joke, nonetheless it whet audiences appetites for a confrontation between the two iconic slasher villains. However they’d have to wait ten long years for this to happen. There only relief coming in the form of the largely considered non-canon efforts of the pre-Scream metahorror of Wes Craven’s New Nightmare, and the tongue-in-cheek future shocks of Jason X.

Though somewhat dissimilar in tone and intent, both films are iconic 80’s slasher movie staples which helped to popularise the genre. Both, to varying degrees playfully mix sex and adolescent experimentation with gory repercussions. And both have created iconic, distinctive and enduring horror icons with near universal recognisability in the pop consciousness. 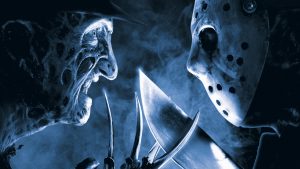 The meeting of these two icons in the fittingly titled Freddy vs. Jason is a fun, frenetic and satisfying end to both franchises. It pulls respectfully from the canon and lore of each franchise without being beholden or weighed down by it. The kids are largely of the disposable cipher variety, but they’re not really who the audience is here for. The film delivers on its title and offers an enjoyably goofy, comic book-like showdown between the two horror legends. The only real downside to the movie outside of the flat, interchangeable nature of the core group of teens is the overreliance of already-dated cgi effects. As two franchises notable for their expert use of practical gore and technical effects in their 80’s heyday, it’s disappointing to see little evidence of it here.

This film saw both franchises reach their natural conclusion, and the retirement of Robert Englund as Freddy. Both franchises were subsequently rebooted with mixed-to-negative results, and Jason is currently awaiting a new incarnation on TV.

The future of both series is uncertain, especially with the recent sad passing of Nightmare creator Wes Craven. A reboot of the Friday the 13th franchise is currently slated for a 2017 release, but this has changed multiple times in the past few months. What is certain however, is that both series left a strong and enduring stamp on horror cinema and popular culture in general, and their influence and legacy will continue to be felt for many years to come.

All images featured in this article are copyright their respective owners