Screenwriter Lawrence D. Cohen was handed the unenviable task of adapting the mammoth novel into a visual format, and on many levels he succeeds. Part 1 brilliantly introduces the characters, and the majority of them are faithful to the book in relation to where they were when they got the call back to Derry. Something glaringly obvious about the dialogue is that it’s almost word for word from the book also, and as a result, the effect of natural conversation and response suffers; it feels like the cast are simply reading a copy of the novel aloud to each other. That said, the casting is spot on, with the choices being as close to the appearances that King describes. Although, he paints Beverly as being a redhead, and it doesn’t quite show here. Other than that, there’s no quibbles. Whilst the adults look the part, it’s unquestionably the kids that are the better performers.

Part 1 focuses more on the time when the group were 12 years old, and is by far the better of the two halves. Cohen captures a sense of nostalgia that manages to seep into a lot of King’s work involving children, especially Stand By Me, and it’s most apparent when It isnt involved: the quarry rock fight, at the cinema, etc. Part 1 is also successful in exhibiting just how close the friends are, but due to its time constraints it doesn’t quite manage to pack in all the events that made readers believe that the group were brought together by a force larger than coincidence. Part 2 doesn’t even come close in conveying friendship, and the relationships between characters (especially Bill and Bev) might as well be non-existent. The whole core of the story is based upon the power of friendship, and yet they seem to forget about Stan in an instant. Of course though, it’s unfair to base It’s score on whether it’s faithful to the source material, because it’s physically impossible to include everything. But to ignore that it misses out vital points that could have been used in place of other,less successful, plot points that were used would be naive. 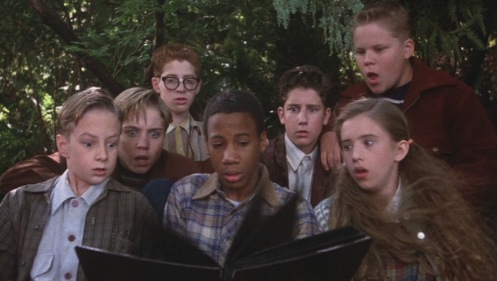 First off, the book explains where It came from. I’m not going to spoil it for those who haven’t read the book (and if you intend to, set aside a good 4 months for it. Seriously) but I will say it’s a pretty amazing origin story that could have been used to open the film instead of the tame ‘killing’ we got. Furthermore, the novel gives a great insight into the history of Derry through Mike’s journal, and every one of them makes for a riveting read. Speaking of Mike, we are never really shown his encounter with It, which is a shame because it’s the second greatest of the book. Needless to say, the greatest is also sacrificed for TV and is completely ignored altogether: Eddie’s encounter with a leper. The list goes on for vital events that were missed: the house on Neibolt Street, the Paul Bunyon Statue, and so forth. Also, the character of It is so much more than a clown; as I said, it shape-shifts into the characters deepest, darkest fear, but it just seems to be a clown for the most part. And the character of Henry Bowers comes across as just a slight irritation for the kids, whereas in the book I always thought he was as criminally psychotic; that menacing attitude just didn’t transfer to screen very well. In fact, the more I think of it, the more I dislike how much this adaptation missed out, but like I said, it would be pointless to simply compare. The ending, however, is one of the most disappointing climaxes to ever be committed to celluloid.

Creator. Owner. Maestro. CEO. That last one is probably a bit too much, but basically Sean is a rarity by being both the brains AND looks behind Review Avenue. Having established the site in 2010, he still can't believe people still value his opinion, with some even genuinely asking for it without laughing.
You might also like
editors pickHorror

by Sean Burton on August 5, 2014
This is not a review. It is simply a short message as to whether you should see Transformers 4 or not.

by Sean Burton on August 7, 2013
Feeling more like a continuation to Mid Morning Matters than vintage Partridge, Alpha Papa still has plenty of reasons for fans of the original series to see it.

by Sean Burton on August 3, 2020
Ambitious in narrative scope but ultimately overstuffed, Bless The Child might not possess any exceptional qualities but it's a solid fixture in the spooky gifted youngster subgenre.
31
6.0

by Sean Burton on October 3, 2019
Fans of anthology horrors such as Creepshow and Tales From The Crypt will find much to enjoy in their 90 minute stay at Blackmore's lodge.
1171
5.0