The Thousand Eyes of Dr Mabuse

I feel like I’m doing a disservice to The Thousand Eyes of Dr. Mabuse, which is being released for the first time in the UK on Blu-Ray as a part of Eureka’s vast and diverse Masters of Cinema label. Mostly because I’ve never been a fan of 60’s Espionage films. Outside of James Bond (which doesn’t really qualify), the elusive sub-genre has never tickled my fancy despite having many loving supporters. Films like The Ipcress File or Funeral in Berlin always bored me instead of intriguing, and unfortunately the same has to be said for this German effort of Dr. Mabuse, which happens to be the last film of legendary filmmaker Fritz Lang (M, Metropolis).

The Thousand Eyes of Dr. Mabuse begins with the startling assassination of a reporter on his way to work. Inspector Kras (Gert Frobe; Goldfinger, Chitty Chitty Bang Bang) along with his blind fortuneteller informant Cornelius (Wolfgang Preiss; A Bridge Too Far, The Train), who has a vision of the crime before it occurred begin to investigate the case. Meanwhile, a rich American industrialist called Henry Travers (Peter Van Eyck; The Longest Day, The Wages of Fear) checks into the Luxor Hotel, which once belonged to the Nazis during World War 2 as a secret surveillance building. He becomes involved with a mysterious suicidal woman Marion (Dawn Addams; The Hour of 13, Plymouth Adventure) who is being threatened by her abusive club-footed husband. These seemingly unconnected characters eventually merge and collide during what appears to be the re-emergence of the long-dead Dr. Mabuse.

Thousand Eyes is not the first Dr. Mabuse film. Fritz Lang had directed two Mabuse features prior to this, one in 1922, and one in 1933. They certainly wouldn’t be the last films to feature the evil mastermind either. After the success of Thousand Eyes, it spawned a series of Mabuse films in a similar way to the Spaghetti-Western character of Django. These films play fast and loose with continuity, so, on the whole, it’s not essential to watch them in any particular order. However, diving blind into the 3rd film as I did probably does make the head-spinning plot harder to swallow.

As much as I tried to invest myself in the tangled web of secret cameras, betrayals, and spies, the longer the film rolled on, the more I felt it pass me by. Its slow pace and campy elements left me cold and rather bored, much like other 60’s spy films. I never cared for the characters or their problems, which made all the secretive shenanigans feel extremely flat. It’s a great shame as Eureka has done a wonderful job with the film’s new High Definition presentation. Photography and production design are perhaps the film’s best qualities, and this new Blu-Ray release shows them off beautifully.

Even for someone as uninvested as me, Thousand Eyes does save itself somewhat with an exciting finale of well-organised payoffs and intelligent action scenes. I just wish I cared about the plot and characters for it to really hit home. However, if you are a fan of Dr. Mabuse or 60’s spy films in general, I would certainly recommend this new release for your collection. It certainly has never looked or sounded better for home viewing.

The Thousand Eyes of Dr. Masbuse is released on 11th May 2020 and is available to order from Eureka and Amazon 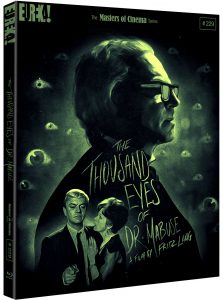 If you have an acquired taste for espionage flicks from the 1960s, The Thousand Eyes of Dr. Mabuse will be one to watch. Everyone else best avert their gaze.

Oliver is a Senior Reviewer for Review Avenue and has covered events such as Nottingham's Mayhem Festival and Manchester's Grimmfest for the site. He began writing for RA infrequently in 2014 before becoming a more permanent fixture at the start of 2017.
You might also like
EurekaGerman filmEureka
7.0

by Oliver Woodings on May 6, 2020
Despite the unavoidable struggles of anthology films, Kwaidan more than makes up for it with visual artistry. The hand-painted, impressionistic backdrops are worth seeing the film for alone. They capture the folkloric essence that presides over all of Kwaidan so perfectly whilst never distracting you away from story or characters.
7.0