A schoolgirl and six of her classmates travel to her aunt's country home, which tries to devour the girls in bizarre ways.

Imagine being stuck in the tunnel of Willy Wonka’s boat ride for an hour and a half and you’ll get a small idea of how deranged Nobuhiko Obayashi’s Hausu is.

At first glance, Hausu sounds like countless other haunted house movies: a schoolgirl, Angel, sets off with her friends to her aunt’s mansion for a summer getaway. While there, emotional traumas of the girls have terrifyingly physical embodiments and they must use their individual talents to survive.

It’s the presentation and surreal direction which makes it stand out for every other movie in the genre. It is no exaggeration to say that Hausu is a visually unmatched experience with endless creativity from Obayashi. Every possible transition imaginable is used: wipes, fades, wiping fades – you name it, it’s here. The special effects have obviously aged as technology advances, but these glaringly distinct uses of chroma keying make the film all the more surreal. 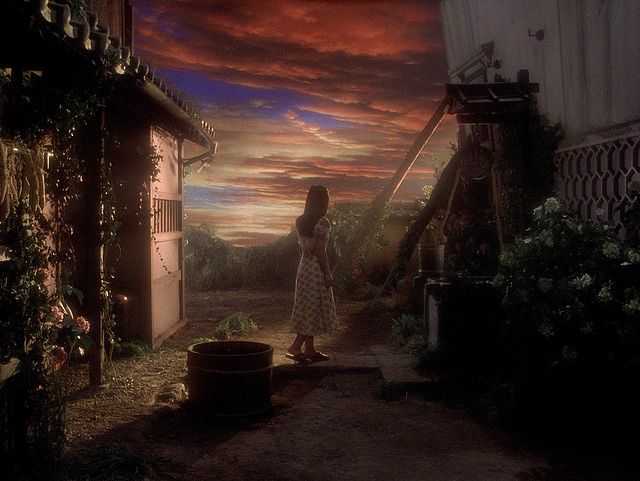 Don’t let the excessively cheery and hilariously upbeat setup fool you though: Hausu is as bloody as they come. Decapitations, mutilation, monsoons of blood – Hausu has it all. The comedy remains biting throughout, with inanimate objects becoming sinister threats – watermelons, dolls and even mattresses. There’s a definite playful streak through Hausu and reminded me of more mainstream films like Evil Dead, Drag Me To Hell and Cabin In The Woods.

Still, for all its satire, self-awareness and humour it does contain some unnerving imagery thanks to unconventional editing techniques and its juxtaposing and memorable music score. A scene involving a piano and another with a giant clock are standout examples, but it’s the climax which really drives this point home. The last 15 minutes or so are a barrage of colours, sounds and rapid editing making it a sensory overload that will imprint on your mind like a dried patch of mud on a welcome mat.

The young cast is extremely animated in their reactions and play up to their set characteristics perfectly. In the video essay of the Blu-Ray special features, it sheds some light on why they were so distinctly different and it is so that the limited screen time usually given to seven characters could be combated by giving them defining personalities. Through the essay, I discovered that Hausu was the first Japanese film to employ a stylist. The video essay contains a treasure trove of tidbits such as this, but if you’ve never seen the film before I recommend saving this insightful feature until after as it gives a little method to the madness. There are an hour and a half of interviews included too as well as a collectors booklet making this the definitive version of the Japanese smash hit.

Eureka’s loving presentation and high-quality transfer give Hausu the long overdue Blu-Ray home it deserves. The colours leap from the watercolour looking backdrops and the UK mainstream release of a cult classic means there’s no excuse for horror fans to miss this.

Hausu is a wholly unpredictable, unrestrained ride through the mind of a surrealist master and its unique style means there’s no time to become bored as its 90 minutes zips by faster than you can ring the bell and scarper.

Will require an open mind, especially for those who are used to conventional studio offerings

Eureka gives this House a cosmetic makeover with a stunning Blu-Ray transfer and worthwhile special features, but the films surreal foundations remain unbreakably strong. A must watch for genre fans and those looking for something completely different from cinema.

Creator. Owner. Maestro. CEO. That last one is probably a bit too much, but basically Sean is a rarity by being both the brains AND looks behind Review Avenue. Having established the site in 2010, he still can't believe people still value his opinion, with some even genuinely asking for it without laughing.
You might also like
EurekaJapaneseEurekaLatest Additions
7.0

by Oliver Woodings on May 3, 2020
If you have an acquired taste for espionage flicks from the 1960s, The Thousand Eyes of Dr. Mabuse will be one to watch. Everyone else best avert their gaze.
Comments
Leave a reply

by Sean Burton on October 3, 2019
Fans of anthology horrors such as Creepshow and Tales From The Crypt will find much to enjoy in their 90 minute stay at Blackmore's lodge.
1230
5.0

by Sean Burton on September 7, 2019
This book-ending of King's mammoth novel further proves that some stories should remain on printed pages for the reader to envisage.
161
TOP 10 All Time
1
Edge of Fear
2
Fall Of A Kingdom
3
The Party’s Just Beginning
4
Valhalla: Legend of Thor
5
Shepherd: The Hero Dog
6
Tailgate
7
Robin Hood: The Rebellion
8
American Fighter
9
The Spy
10
Arthur & Merlin: Knights of Camelot
Copyright © 2022 Review Avenue, All Rights Reserved.
Fonts by Google Fonts. Icons by Fontello. Full Credits here »