by Sean Burton on June 2, 2020
Reviews
1
17
0
previous article
To The Stars
next article
The Vast of Night
Contents
The Details
Release Date

In a future where a failed climate-change experiment has killed all life except for the lucky few who boarded the Snowpiercer, a train that travels around the globe, a new class system emerges.

Travelling by train can be a nightmare experience. Even if you pre-book a seat, there’s a high probability someone’s already sitting in it. You can’t even sit next to your assigned seat due to the imposter putting their hefty bags there. On the days you don’t have the energy to argue, you trudge back to the end of the carriage, where the air in the only available spot smells like you’ve got your head in the uncleaned toilet bowl. To rub salt in the wound, your standing spot in perfect view of the completely empty First Class section. Still, there’s always two positives to this scenario. One, it’s only for a few hours. Two, it’s not a National Express coach journey.

Unfortunately for the passengers aboard Bong Joon Ho’s Snowpiercer, this service will not be stopping at any station. It’s on an endless journey around the World and exists because of a catastrophic failure of Earth’s climate. Outside is an unlivable frozen wasteland. The few who made it onto the train have fallen into a class system. Those at the front live a life of luxury, while the people who inhabit the back live in squalor and fear of the armed guards. One such peasant passenger, Curtis (Chris Evans; Avengers: Infinity War, Captain America) has had enough. He’s planning an uprising, with the aim of getting to the nose of the train. Specifically, The Engine and the vehicles owner, the enigmatic Wilfred (Ed Harris; mother!, The Abyss. Aided by his second-in-command Edgar (Jamie Bell; Rocketman, Man on a Ledge), a drug-frazzled security advisor and a spiritualist figure in Gilliam (John Hurt; Tinker Tailor Soldier Spy, Alien), Curtis and his band of not-so-merry rebels face incredible challenges on their fight to the front.

Originally premiering at South Korea’s Times Square Shopping Mall in 2013 before eventually getting a wide release in 2014, Snowpiercer didn’t actually get a proper UK release until 2018. For the first time, however, it is now available on Blu-Ray through Lionsgate. The timing couldn’t be more perfect too, with director Bong Joon Ho riding high on his 2020 Best Picture Oscar for Parasite. Both films deal with class divide but in very different ways. I’ll refrain from making too many comparisons to the two in fear of doing a disservice to Snowpiercer‘s own merits, but they make for a fascinating double bill.

Think Gareth Evans’ The Raid if the building was horizontal. And on wheels. It’s easy to forget the film takes place on a perpetually moving train though. Every advancement of the gang leads to a fully-realised interior. From strobe-heavy nightclub to a serene garden and everything in between, Snowpiercer‘s production design is exquisite when it needs to be and utterly depressing in equal measures.

Chris Evans is predictably superb as ringleader Curtis. It’s a character that isn’t principally an individual, but more like an embodiment of the entire class he represents. As a figurehead, he’s more than capable of carrying the weight and as an actor, Evans effortlessly bears such a responsibility. He rouses convincingly and you’d unquestionably join his team. Jamie Bell is a fine casting choice as the mischievous, headfirst into battle Edgar, while Tilda Swinton (Suspiria, Doctor Strange) is positively infuriating as Wilfred’s mouthpiece Mason (who is inexplicably – and rather hilariously – of a Yorkshire descent) The late, great John Hurt oozes natural wisdom as the compartments oldest humanitarian Gilliam, with South Korean actor and Joon Ho favourite Kang-Ho Song decidedly untrustworthy as the train’s security expert Namgoong Minsoo. Octavia Spencer (The Shape of Water, Instant Family) is always a welcome face to see and here she finds an especially personal reason to join the mutiny as desperate mother Tanya.

I’m torn with my final feelings towards Snowpiercer. I recommend it – highly – but still, it left me feeling like I’d stuck my head out the titular train door. I feel there’s so much it wants to convey and even at over 2 hours not a whole lot of room to fit it all in, like a two carriage trip from Manchester to London on Cup Final day. Yes, it’s fundamentally a commentary on social class, a topic that Joon Ho would go on to perfect with Parasite, but its drastic sub-zero climate setting is deliberate too. Then when we finally get down to the ins and outs of how the on-board class system works, a whole other barrel of bugs is opened. Now that it’s widely available, and of course a 2020 TV Series, the questions it raises should spark a healthy, Thanos-esque debate as to whether there’s method to Wilfred’s madness.

Snowpiercer just about manages to save itself from completely derailing and buckling under its weighty narrative in its final minutes, but the same can’t be said visually. Its CGI is significantly noticeable as we see more of the exterior of the pre-packed travelling World. It’s not a dealbreaker, but it did take me out of the moment somewhat, as most of the sets and internal effects are practical based.

Transperceniege: From the Blank Page to the Blank Screen – 54 Minute French documentary chronicling the journey of Snowpiercer from a 1982 Comic to the 2013 film. It’s by far the most revealing of features, with interviews from the graphic novel artists and creators as well as archive talks with Bong Joon Ho himself. It’s not a ‘new’ extra, as it was included in all the international disc versions of the film. But it has remained largely unseen in the UK until now.
Chris Evans and Tilda Swinton on Snowpiercer – 4 and a half minute featurette in which Evans and Swinton talk us through some of their feelings on the film, what it’s like working with Bong Joon Ho and their take of what it’d be like to live on the train. Swinton sounds like she enjoys talking about it, but Evans comes across as incredibly bored of answering questions. It appears to have been filmed at the time of the films release rather than a new addition.
The Birth of Snowpiercer – Another 4 minute feature. A more in-depth look at the sets and some behind-the-scenes footage of how it all comes together. A few more talking heads, but this time they appear to be filmed during breaks of filming so the enthusiasm is still strong. It zips through VFX, Costume Design, Martial Arts Co-Ordinator and Hair & Make-Up section with blink and you’ll miss it soundbites from those in charge of these areas.
The End of the World, and the New Beginning – A minute-long animated prologue narrated by train passenger Yona. It’s is admirable in its attempt to put some backstory to the films but at 60 seconds doesn’t come close to providing satisfying answers.
Characters – A five minute feature where the actors describe the people they’re playing. There are a few tidbits of interesting information through anecdotes, but nothing that will change your opinion or understanding of any of the players involved.

Overall, the extras aren’t anything special. Having taken seven years to make it to Blu-Ray in the UK, something more recently filmed would’ve been fantastic. Even if it was a short interview with Bong Joo Ho about how the film affected his career – if at all – in the years since. Nevertheless, the near hour-long look at its transformation from comic book to screen remains a fascinating look at the filmmaking process.

Snowpiercer is on Blu-ray™ and DVD now from Lionsgate UK. 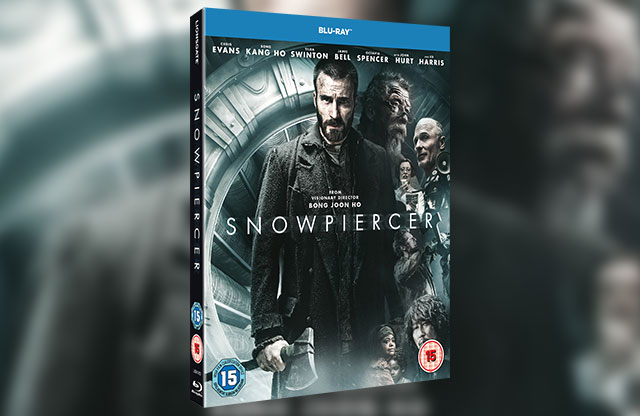 All aboard the Joon Ho Train as the Godfather of contemporary social commentary takes us on a thrilling but occasionally cramped ride of first class entertainment.

Creator. Owner. Maestro. CEO. That last one is probably a bit too much, but basically Sean is a rarity by being both the brains AND looks behind Review Avenue. Having established the site in 2010, he still can't believe people still value his opinion, with some even genuinely asking for it without laughing.
You might also like
ActionChris Evans

by Sean Burton on July 31, 2020
Get the latest details on Derrick Borte's road-rage thriller Unhinged including the new trailer, release date and more.

by Sean Burton on July 28, 2020
All the latest details for Christopher Nolan's time twisting Tenet, including the most up-to-date trailer.

by Sean Burton on July 26, 2020
Get all the details on Corey Pearson's brutal actioner Message Man including the UK VOD release date, trailer select images from the film and more.

by Sean Burton on July 11, 2020
Deftly paced and filled with century spanning characters, The Old Guard could be the franchise Netflix has been looking for to fiercely defend the quality of their Original output.
2.0

by Oliver Woodings on July 9, 2020
It's bad when you'd rather be watching Guy Richie's utterly stupid take on King Arthur over this vapid, hollow shell of a movie.
Comments
Leave a reply

by Sean Burton on June 24, 2020
The Last Waltz is the definitive insight and celebration of a band, The Band, whose music defined generations and unquestionably influenced the sound of rock and roll we hear today.
18
9.0

by Sean Burton on July 16, 2020
The terribly terrific twosome of Lugosi & Karloff exhibit why they're masters of horror in a magnificent collection that should be in every genre fans arsenal.
105
9.0

by Sean Burton on July 9, 2020
Masters of Love is endearingly sweet, refreshingly realistic and filled with legitimate characters - nay, people, to both laugh at and with.
1339
8.0

by Sean Burton on August 3, 2020
Ambitious in narrative scope but ultimately overstuffed, Bless The Child might not possess any exceptional qualities but it's a solid fixture in the spooky gifted youngster subgenre.
9
6.0

by Sean Burton on October 3, 2019
Fans of anthology horrors such as Creepshow and Tales From The Crypt will find much to enjoy in their 90 minute stay at Blackmore's lodge.
183
5.0

by Sean Burton on September 7, 2019
This book-ending of King's mammoth novel further proves that some stories should remain on printed pages for the reader to envisage.
136
5.0

by Sean Burton on August 28, 2019
Critters Attack! nips at the heels of its few positive aspects instead of going for the jugular, but there are just enough bite-sized moments of fun to recommend it for a midnight movie marathon.
140
TOP 10 All Time
1
Edge of Fear
2
The Party’s Just Beginning
3
Robin Hood: The Rebellion
4
All The Devil’s Men
5
Detainment
6
Arthur & Merlin: Knights of Camelot
7
Your Move
8
Escape Room
9
Ring: 20th Anniversary Review
10
Scream For Me Sarajevo
Copyright © 2020 Review Avenue, All Rights Reserved.
Fonts by Google Fonts. Icons by Fontello. Full Credits here »